A team of Sprott students won the Network of International Business Schools Worldwide Case Competition for the second year in a row and the third time in four years. The competition was hosted by Satakunta University in Rauma, Finland and took place February 26 to March 3, 2017.

“I think they won because they were doing exactly what we were teaching them to do and they did it well,” said Linda Schweitzer, coach and Professor of Management and Strategy. “As judges gave us feedback, they adapted ever so slightly to the setting and to what the judges wanted.”

One area where the team made adjustments was to their presentation format.

“For the last three years, the competition has been in an English-speaking country. Explaining the idea required a lot more information and backing the success of that idea required a lot more information, not only spoken but on the slides as well,” said Carlos Cantafio, who is concentrating in International Business with a minor in Economics. “Going to Finland and having that language barrier was the biggest challenge and we had to adapt to that… It actually forced us to explain things in a more cohesive manner, but at the same time communicating the same ideas.”

The Sprott team won all six of their cases in the five days of competition. They faced the University of Vermont, Ireland’s Dublin Institute of Technology and Germany’s Heilbronn University in the preliminary rounds; Canada’s Laurentian University in the quarter finals; and London Southbank University from the U.K. in the semi-finals. In the final round, they went head-to-head against Concordia University for the championship title.

“The support we received from the other teams throughout the week was incredible,” said Chongo Bwalya, who has a double concentration in Accounting and Finance. “Through each and every presentation we made, the other teams were telling us how inspired they were by our presentations and I think that really kept us going.” 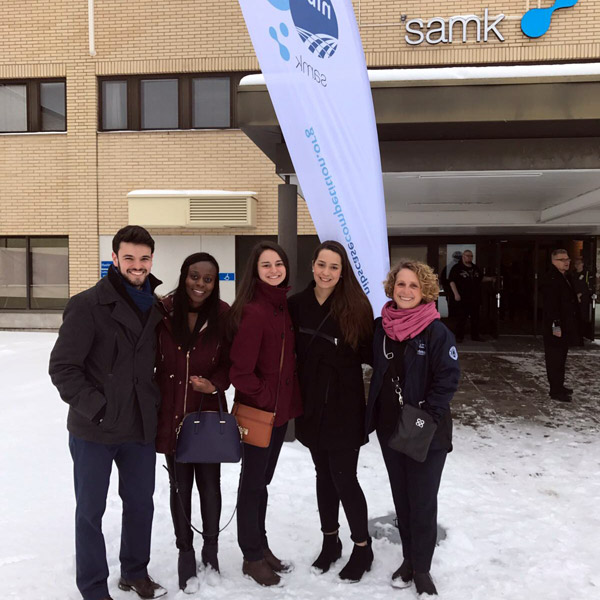 As the team advanced through the rounds, the presentation room got bigger and fuller as more people came out to watch. The final round was livestreamed worldwide.

“The pressure was definitely ramping up, but a room full of people from across the world was probably the most supportive feeling because those are all your friends that you made from different countries and different teams throughout the week,” said Jacqueline De Sousa, who has a Marketing concentration. “They were all cheering you on and they had all experienced what you experienced, and then all of your friends and family back home also had the opportunity to watch. So instead of that being a daunting thing, we all took that as supportive.”

“The highlight of the whole week for me was that moment at the end of the finals, before we knew whether we had won or not, but knowing that regardless of what happened, we had given it everything we had to give,” said Sonia Fendt, who is concentrating in International Business and Supply Chain Management.

But the competition was not all about winning and the students gained more than a trophy from the experience.

“The best part for me was just learning how to work under pressure,” said Chongo. “A lot of the time when you are in a stressful environment like that, it’s easy to crack. But I think the support we got from our team and dealing with that really taught me how to deal with tough circumstances and come out on top.”

“For me, it was the international focus of the competition,” added Sonia. “I thought the cases were amazingly well chosen and they really gave each of us the opportunity to bring our skills to the table. And having always that international perspective, which for some of us is our concentration, so being able to put that into practice was really exciting.”

“For me it was more about the cultural exchange that happened there,” said Carlos. “[Rauma] is a small town that was very, very proud to display what they are and the values they hold. How they transformed that into building a competition from a small university to bring 16 different universities together and really just enjoy the differences in culture and language to create an environment that is a lot more inclusive and very creative.”

“I have never travelled and have never been to Europe. It was amazing to experience what Europe had to offer. It was incredible looking at the architecture and seeing the differences in culture,” said Jacqueline. “The second part was my ability and everyone’s ability to showcase their passion and what they are good at, and shaping it to a culture that is different from ours.”